Categorized as
2469
Tagged as
Delray Beach 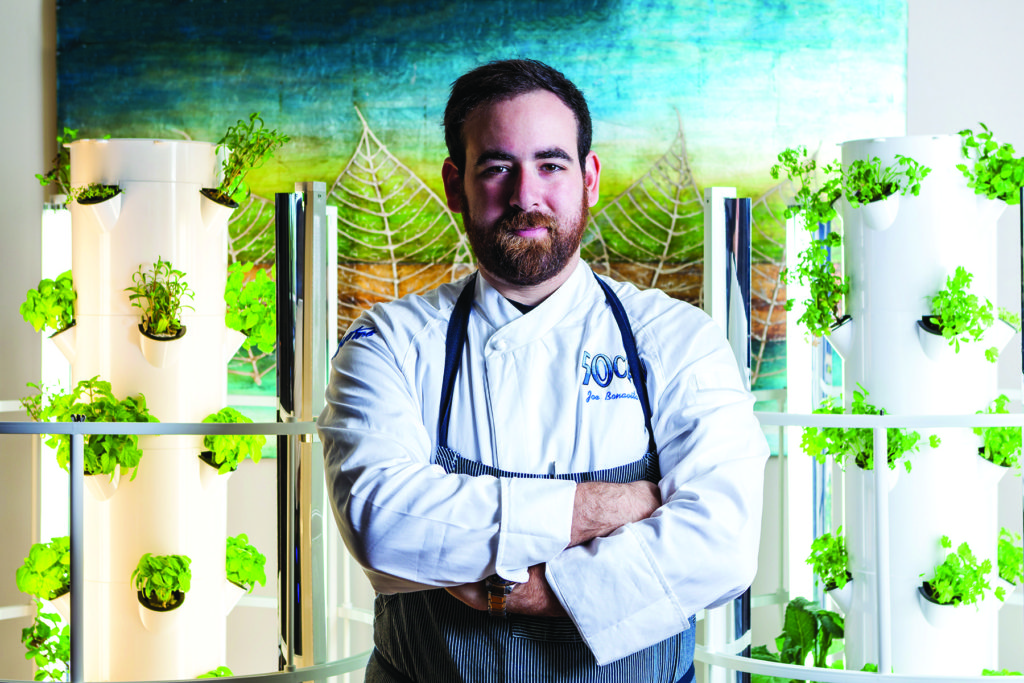 Panoramic sea views complemented by contemporary cuisine have been the hallmarks of 50 Ocean in Delray Beach. The award-winning menu features fresh-caught Florida seafood plus land-lover favorites.

Joseph Bonavita, Jr., has recently taken over as the executive chef at 50 Ocean. From early childhood, the only career he ever thought of pursuing was that of becoming a chef.

A culinary management course at Le Cordon Bleu College of Culinary Arts in Chicago gave him the basics. Mornings were spent in classes, while the afternoons entailed working at renowned restaurants. An apprenticeship at Alinea with legendary chef Grant Achatz gave him a sense of modern, minimalist, molecular cuisine. After living in Chicago for two years, he was offered two full-time positions. But the call to return home was too strong for the young chef. He moved back to New York City and took up residence as sous chef at chef Todd English’s flagship restaurant, Olives. Later, he apprenticed and staged at Per Se and Le Bernardin, then worked under chef Graham Elliot at Primary Food & Drink as sous chef.

Bonavita’s family has Sicilian roots. His love for cooking and the sea began at an early age. They lived in Smithtown, New York, and later moved to Oxford, Connecticut. Weekends were spent fishing with his father on Long Island Sound.

Moving to Florida has been inspirational for him. The high-quality, local produce and sustainable seafood have given him an opportunity to showcase his talents. He refers to his style as “ingredient-driven, global cuisine.”

50 Ocean’s menu will continue to have all of the customer favorites, including blue crab-crusted grouper with green bean potato hash, pan-seared snapper, Florida’s Jackman Ranch New York strip, and buffalo ribeye. Look for some pleasant surprises such as a daily selection of crudos (sliced, seasoned raw seafood served with a sauce), sushi rolls, ceviches, and kimchis.

Located above Boston’s on the Beach, the casually elegant 50 Ocean offers spectacular, panoramic ocean views through a wall of floor-to-ceiling windows, and exquisite cuisine with exciting, local influences, beautifully presented by a knowledgeable and seasoned staff. 50 Ocean also includes the chic Hemingway Lounge, a private dining/wine room perfect for special events, business lunches, and celebrations. An outside patio with understated style is the hot spot for a weekend brunch, featuring bottomless mimosas and Bloody Marys, and a build-your-own Grey Goose Bloody Mary bar.

Founder at EatPalmBeach.com
Cristyle is a South Florida native, born in Miami and raised in Palm Beach. Her love of food came through her travels and seeing how cuisines differ and relate so much. She attended the University of Florida, had a short stint in Charlotte, NC and is now back home - ready to eat her way through Palm Beach County and share her findings with locals and visitors alike. From brunch to happy hour to foodie events, she's got you covered!

Latest posts by Cristyle (see all)

In the Mood for..